Home / Blog / New Releases / An Excerpt from Day and Knight!!!

Day and Knight releases Monday May 4 and I thought I’d offer up a taste. I had an amazing time creating these characters and I really hope they work their way into your hearts the way they did into mine.    I hope you enjoy it. 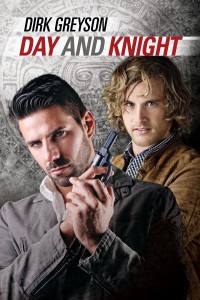 “Are you going to knock off for the night or sleep at your desk, newbie?” Knight asked, breaking Day’s concentration. “I have our travel arrangements all set, and the company even sprang for a decent stateroom.”

“We’re only going to be on the ship a few days. It seems like a waste to—”

Knight cut him off with a wave of his hand. “You’ve been busy and haven’t heard the latest. The sailing we’re on is a gay cruise, so you and I are playing the part of lovers on a vacation together.”

Day’s stomach did a flip and he tried his best to keep his discomfort off his face. “Sounds… interesting.” God, what in the hell did he say to that?

“Don’t worry, we don’t have to take it too far, but it was the easiest way to get us on the ship we need, and it will help us blend in with the other passengers.” Knight handed him a set of papers. “Put this someplace safe. That should be all your travel arrangements.”

Day nodded, reading through the details.

Day looked up from the travel documents and opened his mouth to say thank you, but Knight was already leaving the office with the grace of a panther on the prowl. Day was transfixed, his mind instantly stripping away the dress shirt and pants, imagining what might be hidden beneath. Probably acres of rich, olive-toned skin with just enough short dark hair on his chest to make things really interesting. Day’s mind conjured up a scent that made his head swim.

“Practicing for the cruise?” Knight asked from the doorway, and Day blinked once as he fell back to reality.

“Just wondering if being an ass came naturally to you or if you actually worked at it?” Day flashed a smile, thankful he’d been able to come up with something to cover his little daydream. Shit like that had to end. He needed to keep things together. He could do this.

“It’s a talent gifted by the gods,” Knight countered and left the room before Day had a chance to respond.

Day ground his teeth for a few seconds. That guy was going to drive him insane. He wished he had someone else as his partner for his first assignment. Day closed the transmission files he’d been working on and saved them onto a USB stick so he could take them home. A grin formed on his face as he opened a window into the Scorpion internal systems and went to work, searching for information on Knighton. If he was going to be working with the man, he was going to find out everything there was to know about him. Fuck if he’d stumble around like some newbie and let Knight get the better of him all the time.