Darkness Threatening the second in my Yellowstone Wolves series, releases on Wednesday and I thought I’d give you all a sneak peek.  I hope you enjoy it! 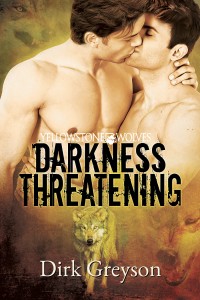 “I don’t give a shit about what they taught you at that ridiculous school,” Juneau yelled as he stood from the table and stalked over to Fredrik, who was determined not to show fear in any way. Juneau might be his brother, but there was absolutely no love lost between them. “I don’t know where you learned that being a fucking fairy who takes it up the ass was all right, but in this pack, it certainly is not.” Juneau backhanded Fredrik across the cheek, sending him reeling in a circle.

Fredrik caught the table to keep from going down to the floor. “Screw you, Juneau. You’re the one who doesn’t know shit about anything. I am who I am, and there isn’t a damn thing you can do about it. Dad is dead and you’re living in this shithole cabin on the edge of nowhere.” He stood back up.

“Are you challenging me?” Juneau growled. “Because I’ll gut you like a rabbit if you ever talk to me like that again.” He stepped closer once again.

“I’m your alpha and don’t you forget it. I may be living in this piece of shit, but I won’t be for long.”

“Where is everyone else?” Fredrik meant it dismissively, but the stare he got was cold enough to freeze water on the equator.

“They’re coming. Those loyal to Father were scattered after his downfall last summer, but I’ve put out word to those who were most loyal. They’ll all be here in three days, and then I’ll start building my own pack, taking back what should have been mine in the first place. And you, dear brother, will stand at my side, keep your smart mouth shut, and do what I say. There will be no weakness in this pack, and that means no males taking it up the ass. You will mate and have litters of pups. We need our numbers to grow as quickly as possible.”

“Why would I want to go along with what you want?” Fredrik was surprised at himself and wondered where he found the courage to speak up. He’d always been the quiet one. Their father, Anton, hadn’t been interested in anything that didn’t involve fighting, brute strength, and power. Those three things were all that had counted, what he’d lived for, as essential to him and his wolf as oxygen.

“Because I’m your alpha and a hell of a lot stronger than you. And because I’ll kill you slowly and painfully if you don’t.” Juneau stood and glanced at the nearest chair, then back at him. He glared at Fredrik with the intensity of one of the lasers he’d seen at school. “I’m waiting.”

Fredrik picked up the chair and brought it to his brother, who sat as though he were a king. But there was no kingdom. When their father lost his challenge to Mikael Volokov, the alpha of the Old Faithful pack, everything changed. They were outcasts—all of their father’s family was—tainted with his dark madness and obsession with power. Fredrik had been the only one to escape much of the fallout because Anton had sent him to college. He’d said he wanted Fredrik to learn the ways of men and the outside world, probably so he could extend his power there was well. Thankfully, his father had provided enough money for him to almost finish school. There wasn’t quite enough, though, and that had given Juneau power. If Fredrik wanted to graduate, then he had to submit. This discussion was the culmination of that decision—one Fredrik now realized could be the biggest mistake of his life.

Fredrik had thought he was out of the family and had gotten away from them. This was not the life he wanted, and his father’s death had raised the possibility of him just fading away. He’d hoped he could find a new pack and start a whole new life. Now that wasn’t to be. Tuition increases had left him with little choice but to approach his brother, and now he was stuck.

“You’ll live in this house, where I can keep an eye on you. The room you’ve been using will be your home.” Juneau looked up, and the woman who had been working at the stove, doing her best to look the other way and pretend she saw and heard nothing, rushed over and placed a plate in front of Juneau. He didn’t acknowledge her in any way other than with a glance before he began to eat.

Fredrik stifled a cringe. He’d been sleeping in that room for two nights. Well, there had been very little sleeping, given the fact that his brother spent much of the past two nights making as much carnal noise as possible. Juneau was insatiable and had sex with as many as three females a night. Like their father, he felt it was his duty to father as many pups as he could. He was the alpha male, and, as such, he had the pick of anyone he wanted.

“Hearing how a man behaves will be good for you,” Juneau continued, pulling Fredrik out of his thoughts. “You will also ask permission before you leave the compound, and you will talk to no one unless I expressly permit it. Somehow I will make a real man out of….” He waved his hand in Fredrik’s direction. “This.” He shook his head. “How you ever came from our father is beyond me.”

The door opened and Yuri, his brother’s beta and partner in crime and punishment since they were children, strode into the room and sat.

“Inge,” Juneau said. It was the first time his brother had used the woman’s name since Fredrik had been there. At least Fredrik knew what it was now.

She made up another plate and set it in front of Yuri. Fredrik was starving, but he made no move to sit. The idea of sharing a meal of any kind with his brother was about as appetizing as eating mud between two pieces of crap.

“Dimitri called, and he has a surprise for you,” Yuri said gleefully, his eyes filled with evil mirth.

Fredrik went cold, wondering what Yuri and his twin brother were up to. Yuri and Dimitri were two peas in a pod and thought alike. Truthfully, it was more likely that they shared a single brain between them. Neither was at all bright, but they were ruthless and believed in taking what they wanted.

“What kind of surprise?” Juneau snapped and blew a breath out his nose. “Sit down!” he demanded, and Fredrik did as he was told.

Inge brought a plate for him. He smiled at her and thanked her softly. Inge actually looked as though she wasn’t quite sure how to process the simple politeness. She eventually nodded and scampered away like a scared deer.

“He said that it was an accessory for your bedroom and that you were going to love it.”

Fredrik managed to keep from cringing. God knew what his brother’s demented cronies had come up with now, but it couldn’t be good. He ate, but the food tasted like nothing at all. Fredrik was eating only to eat. Tasting what was in his mouth was nearly impossible. He was a prisoner here; that was all there was to it. He needed to figure out a way to get out of here, and he needed to do it fast.

When he was done, Fredrik took his plate to the sink and made to go to his room. He needed to get away.

“Sit back down,” Juneau said, and Fredrik sighed and sat once again. “Our time is coming very soon. I can feel it. The packs that splintered once Father died are still trying to get on their feet. Volokov is stretched way too thin, and while all those new alphas may have voted him as high alpha or whatever they’re calling it, he can’t be everywhere.” Juneau grinned.

“What are we going to do?” Yuri asked, rubbing his hands together. “I want to get my hands on him alone, just for a few minutes.”

Juneau jumped to his feet, his chair tumbling backward to the floor. “Volokov is mine, pure and simple.” He gripped the edge of the table and leaned closer to Yuri. “You got that?”

Yuri showed some intelligence—or maybe it was simple self-preservation—and nodded, and Juneau slowly sat back down.

Fredrik wanted to ask how his brother thought he was going to bring that about. The other packs had united under Volokov, and they were stronger now that they had one person they all trusted. But Fredrik said nothing because he didn’t feel like getting hit again.

He ended up sitting at the table for another hour listening to Yuri and Juneau talk over all their grandiose plans that meant absolutely nothing. Juneau was as ruthless as their father, but he was also crazier, if that was possible.

A truck pulled up outside; the deep rumble told him it was big, probably to compensate for something. When the clatter stopped, a door squeaked open and closed, followed by another. Then Dimitri slithered in like the snake version of a wolf that he was. Where Yuri was strong and tended to stomp, Dimitri was sneaky and stalked around behind things.

“I got you a present,” he said to Juneau. “You want me to deliver it?” He smiled, showing off his missing front tooth. It made him look more like a yokel than his brother, but looks were deceiving.

“Sure.” Juneau sat back and waited while Dimitri went back out to his truck.

Fredrik was ashamed, but he turned to watch as well. He swallowed hard and nearly vomited his lunch when he saw Dimitri come in carrying someone over his shoulder. It was a girl, probably about sixteen, and she was a pretty young thing. Definitely a wolf, and a strong one.