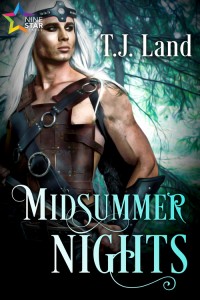 Newly arrived at Oberon’s court, Puck has already made a name for himself through his wit, his wiliness, and his very nice legs. But he’s not interested in the envy of his peers; what he’s really after is the attention of the Lord of All Fairies himself. Seducing the monarch will surely win him power and prestige, provided he can withstand Oberon’s famously bad temper.

Soon, though, Puck realizes that Oberon’s belligerent façade is just that, and his schemes of strategic seduction are submerged beneath budding infatuation. Now, Puck will have to muster all his tricks, from sonnets to the lash, to win the fairy king’s heart – a task which becomes substantially more difficult when Oberon discovers that Puck has been consorting with mortals…

Find it on NineStar Press, Amazon, or  Goodreads

Word spread quickly through the court; Oberon’s new servant was going to be a problem.

Foremost in the compilation of evidence were his legs. They made up two thirds of his height and were rarely covered in much more than a butterfly-wing skirt that barely afforded him decency and dozens of tattoos that made it seem as though his skin was sprouting leaves.

Ignoring them was a fool’s errand. When the new servant walked, he strutted, and when at rest, he would lean against walls, furniture, and often Oberon himself, his gorgeous legs stretched out for all to see.

“Shameless,” tutted Titania’s maids, each one of whom would have happily murdered her sisters for a chance to trace one of the painted leaves with her fingertips.

What made it worse was that he was clearly a foreigner, with his peculiar accent and curly black hair. No one could work out where Oberon had found him, although rumours abounded. Some said he had come from the moon. Others said he was actually the child of a demigod, abandoned among mortals until Oberon had espied him and stolen him away. And even others said he was a lump of clay into which Oberon, for his own personal amusement, had breathed life.

Nevertheless, whatever their opinions on his origins, all agreed it was in no way proper.

“King Oberon has not walked below my branches for days,” sighed the willow.

“His Majesty lavishes all his attention on the newcomer,” muttered the river sprites bitterly.

“Our sweet and fearsome king has not asked us to sing for him in weeks,” wept the swallows, and in their sorrow, they departed for warmer climes; though it was a most unseasonal time to do so.

Titania, for her part, was delighted.

It was no secret that theirs was an unhappy marriage, and her husband’s new toy had a knack for keeping them out of one another’s hair. What was more, he was unfailingly polite, and his presence seemed to boost her handmaidens’ morale.

“You could go far, Puck,” she told him, seated on her throne of peacock feathers.

He bowed. “Thank you, Your Majesty.”

“My only concern is whether or not you will be able to cope with my husband’s temperament in the long run. He can be…difficult.”

With wide eyes, black and bright as two beetles, Puck said, “I am honoured to serve my king and my queen in whatever capacity they ask of me.”

Titania, who was no fool, merely smirked and sent him on his way.

NineStar Press is hosting a Rafflecopter Giveaway to run for the duration of the tour. Prizes will include a $10 Amazon Gift Card and a credit for a free book from the NineStar Press website.