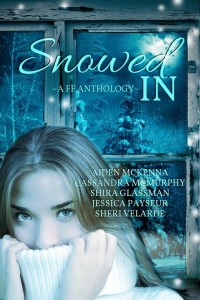 Snowed In is a blend of frost, snow, and wintery lesbian romances from five Torquere Press authors.

A snowed-in band mom falls for a music teacher in Fearless by Shira Glassman. In To Melt a Frozen Heart, Heather finds herself stranded in a blizzard, by Sheri Velarde. Jessica Payseur delivers an icy little fantasy in Frost and Ice. Because of a snowstorm, Rebekah’s not so lonely when Lily can’t make it home in At the Bottom of the Mountain by Aiden McKenna. In Cold Chemistry by Cassandra McMurphy, Alyssa doesn’t want to want Jayne, but she can’t seem to help herself.

Find it on Goodreads | Torquere

A crust of snow caked the steps to the door, broken by a big set of shoe prints. Boots, she thought, and paused, suddenly feeling uncomfortable.

She pulled out her phone and dialed Janet for the fifth time. The line crackled and popped, but it did ring. Alyssa glanced around to the window, but the curtains were drawn tight. The line rang more. Janet’s voice came on, soft and sophisticated. “You’ve reached the voice mail of…”

Alyssa hung up, feeling worried and a little defeated.

Did she smell smoke? She glanced up, and sure enough, there was smoke coming from the chimney. A burglar wouldn’t have decided to light a nice, cozy fire, would he? Whoever was here, it had to be one of Janet’s friends. What were their names? Erin and James?

She tried the knob, and the door swung open easily. Warm air beckoned her inside. Alyssa hauled her bag over the threshold and closed the door, afraid to lose one delicious drop of heat.

The pop and crackle of the fire replied. Gosh, Janet was so damn lucky. The living room looked straight out of some winter resort, with soft leather couches piled with pillows, thick woven rugs on the floor, an ottoman covered in fur in the middle. The fire cast playful shadows across her feet from the red stone fireplace, which above, sported a breathtaking painting of the mountainside in winter.

Something creaked in the hall.

“Hello?” Alyssa said, her voice coming out thick and wavering.

A shadow flickered ahead.

“Janet?” The shadow paused and moved toward her. Alyssa’s mouth went dry and her hands tightened around the strap of her weekend bag.

God, who was this? Janet didn’t have friends… like this, didn’t she?