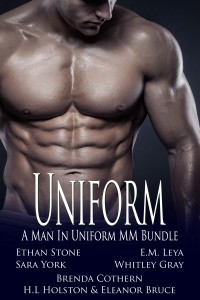 Meet the men in uniform. These are everyday men who put on a uniform and become our heroes. Through good times and bad, they are there to save the day, sacrificing more than most of us can imagine as they put their lives on hold in service to us.

Love doesn’t wait until life is calm, and sometimes it’s the pressure of the job that throws two men together. Under stress and demand, they find solace in each other, forming bonds that can’t be ignored.

Follow our heroes as they fight not only for what is right and just, but also for their hearts and the men they love.

Find out more on Goodreads.

Curt shut off his bike and pulled the helmet from his head. Sweat dripped down his spine as he glanced up at the sky, wondering how it could be so damn hot so late in the day. The sun was just setting, but it had been an unusually hot summer for the area with temperatures reaching into the triple digits in early June.

He ran his fingers through his thick, long brown hair, wishing he could cut the length off and go back to the buzz cut he enjoyed before going undercover. It wasn’t just the hair, but the beard too. It itched and added to the already sweltering heat, but it also helped to hide his identity.

Too many years. Sometimes it seemed like a lifetime since he swung his leg over the bike and infiltrated the biker gang. The Boars had their hand in every illegal activity you could think of, and Curt worked hard to gather evidence and build a case so they could take the group down. He was close. Each day he woke up, he wondered if it would be the day he would get the call that they were ready to make arrests.

As he glanced at the clubhouse, he sighed. The newest venture for the club really bothered him, and it was also why he was pushing to close things down and make arrests. He glanced past the long driveway where several bikes were parked to the covered sheds behind the house.

Inside those sheds were dogs, several strong pit bulls that the club now used for fighting. It turned Curt’s stomach to think about those dogs suffering. He’d seen all kinds of shit go down in this club, but few things bothered him as bad as seeing the dogs fight.

Every instinct in him was to put a stop to it right away, but they had too much invested in this case to rush anything. Still, he’d met with his superiors, letting them know the time had come. They couldn’t wait any longer. He hoped they would listen and they could make arrests soon.

Fatigue and stress consumed his body, but he had to keep focused. One mistake and his life would be over. This wasn’t a simple game. This was a world of life and death, and he needed to be at his best.

One benefit to his years of working with the gang was he now held leadership for his area. He was third in command in the state, which meant he had final say in many of the things going on. With the agency behind him, everything he touched was golden. He had access to the best drugs, the cheapest guns, and nothing ever seemed to touch him. He could get away with anything. The men beneath him had to listen or risk his wrath. He was firm enough, while trying to stay within the law, so that most had a healthy respect for him.

Some things, like the dog fighting, he couldn’t control, that was a new thing that came from higher up, but what took place inside his clubhouse and within his small group of members, he could do with as he wished.

He rolled his shoulders as he headed up the path to the clubhouse, noticing that the lawn needed to be mowed. He was strict about keeping the clubhouse looking somewhat neat. His men bitched and whined, but he reminded them that a rundown place attracted attention, attention they didn’t need. He always said if he was running drugs, he’d put an ‘I Love Jesus’ sticker on his bumper, and hire two young girls in homely dresses to drive the car. It blew his mind how people would use beat up, old clunkers to do their illegal activity.

He didn’t expect some Home and Gardens cover look from them, but he did demand that it wasn’t an eyesore like so many other clubhouses were.

“Dylan!” he yelled as he walked through the front door. “Who the fuck is supposed to mow the lawn. Get your ass on it. This place is starting to look like the city dump.” He blinked as his eyes adjusted from sunlight to the interior.

“Curt, shit, get in here.” Dylan called from the back living room. “You got to see what we found sneaking around the place.”

Curt groaned at the excitement in Dylan’s voice. It meant something major was going on. Readying himself for anything, he kicked aside someone’s backpack as he made his way to the back room.

Several of the other bikers stood in the doorway, but parted as Curt’s large frame pushed his way through them. The emotion in the room crackled, and as he watched the other members, his heart sank. This wasn’t going to be good. It was the same feel that he got when they were about to do a big job. The looks on some of the faces were ones he saw right before someone died.

“Look what we found sneaking around the dog pens,” Dylan called.

Curt finally pushed through the mass of bodies and he froze, letting his calm demeanor slip for just an instant, but quickly schooling his features and forcing himself back into character. He couldn’t believe what he was seeing. Kneeling before Dylan was a uniformed police officer. His hands were tied behind his back.

“What the fuck is this, Dylan?” Curt walked around the men, coming to stand beside him. As he got his first glimpse of the officer’s face, his breath caught. He knew this man. More than knew him, he would never forget him. He quickly looked away, turning his focus on Dylan, praying that the man on his knees didn’t recognize him, and if he did, he would know enough to keep quiet.

“Found him sneaking around the dog pens in back. He said someone reported we were abusing animals. He’s seen too much, Curt. We gotta take him out.” Dylan held his gun in one hand and ran the muzzle under the officer’s chin.

Curt’s gut twisted. The man on his knees wasn’t just some officer, his name was Tony and he’d been in the police academy with Curt, God knows how many years back. The two didn’t just know each other, they’d dated during their training, ending things when they graduated and both went their separate ways. Once Curt moved and went undercover, he was sure he’d never see him again.

He stared at Tony, trying to see if he recognized him. With his beard and the tattoos that now covered his body, he didn’t look anything like the fresh shaved, clean cut recruit that he had been back then.

Tony on the other hand, looked just as good as he had when they met, if not better. His body was thicker, his muscles larger, and his eyes more alert and aware. The blond hair now longer than the buzz cut he remembered him having. His pale blue eyes reflected the fear he must have been feeling.

There was no doubt in Curt’s mind that Tony knew how much trouble he’d walked into, and with one wrong move, his life was over.