The seed for the Summerskill and Lyon books was sown years ago when I entered a short story competition that was looking for pieces about ‘real’ gay life. “We don’t want to hear about the discos, the back rooms and the Judy Garland wannabes,” the blurb said, “tell us about what gay life in twenty first century Britain is really like.”

I duly knocked out a poignant (I thought) yet (mostly) honest piece about the day in the life of a gay teacher – something I had far too much experience of at the time – and sent it off. It sank without trace.

Six months later, the competition’s entries were published under the banner: “Here it is! The truth about gay life in twenty first century Britain! The discos! The back rooms!! The Judy Garland wannabes!!!”) Embittered and resentful, I resolved there and then to dedicate my life to writing truthful, honest stories about the British gay experience.

Finally, I decided I’d better get down to it.

Like many writers, I chose the police procedural genre for the many opportunities it offers to explore characters and situations. (I considered teaching, the setting for that first story, but guessed the public would be more interested in a murder mystery than trying to work out who left that piece of chewing gum on Mr. Smith’s chair.) Once I knew the genre I wanted to work in, Dave Lyon simply stepped up into the limelight. I can say here and now, he is not me. He’s more driven, less accommodating and a hell of lot better looking. Claire Summerskill however is definitely one of my friends. And she hasn’t even worked it out yet. Even though she’s called Claire! It’s true what they say about people not recognising themselves in stories – thank heavens.

Oh, and that story I wrote, full of moving truths…. I submitted it to another competition years later and it won (a regional round). Take that disco bunnies! 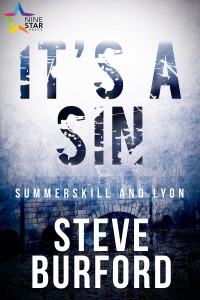 “He is a talented and very promising young policeman. Make no mistakes, he deserves the promotion.”

But when gay Detective Sergeant Dave Lyon is assigned to Detective Inspector Claire Summerskill’s team as part of the Service’s ‘positive discrimination policy’, no-one at Foregate Street Station is happy. And that includes Summerskill and Lyon.

Mutual suspicion and mistrust must be shelved however, when a young man’s beaten body is found on a canal tow path, and a dead-end case of ‘happy slapping’ unexpectedly turns into a murder investigation.

Why would someone want to kill middle class arts student Jonathan Williams? And how is his death linked to that of rent boy and would be ‘adult’ film star Sean?

As Summerskill and Lyon’s investigations proceed, the newly-promoted detectives begin to untangle a web of connections, false assumptions and sheer prejudices that force them both to question closely not just their relationship with each other but with the rest of their colleagues at Foregate Street Station and with the Police Service as a whole.

“It’s A Sin” is the first in the “Summerskill and Lyon” police procedural novels.

Three people walked past him on the canal path that cold November morning before anyone realised something was wrong.

The first, a professional man, out early for the morning paper, saw him sitting under the small footbridge that crossed the narrow strip of dark water. He took in the face-concealing hoodie, the flashy and doubtless ridiculously expensive trainers, and kept as far away from him as he possibly could without actually walking on the water itself. The skin on the back of his neck prickled nervously as he walked past the youth, and the Guardian was rolled tight in his fist ready to beat the lad off if he leapt on him from behind. But the slouched figure remained immobile, his back to the bridge’s crumbling brickwork, and the man passed by unscathed, relieved and curiously exhilarated.

A young mother pushing her pram had been next. She hesitated when she came upon the sitting figure, glanced nervously at the precious bundle in front of her, then steeled herself and marched straight past him, arms stiff, pram a small juggernaut. She passed safely, and laughed a little to herself at the frantic hammering of her heart and her breathlessness. She cooed nonsense to her child about ‘silly mummys’, and inwardly vowed never to go that way again at that time of the morning.

It was the elderly man walking his dog, diligently employing his pooper scooper, who wondered what a young lad would be doing sitting on the damp grass, propped against a dripping stone wall so early in the day, and who asked himself if, maybe, something might be wrong. He moved a little closer, pulling slightly at the dog suddenly grown restive on its lead. Perhaps the boy was drunk. Well, he’d had a couple of mornings like that himself when he’d been that age. Or maybe he was stoned or high or whatever the hell they called it nowadays. And what were you supposed to do then? He hesitated. His dog whined.

And then it hit the old man: what if the boy in front of him was dead?